Introduction to the Library 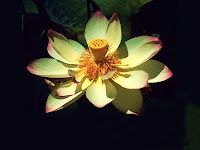 Chanakya (Sanskrit: चाणक्य Cāṇakya) (c. 350-283 BC) was an adviser and a prime minister to the first Maurya Emperor Chandragupta (c. 340-293 BC), and architect of his rise to power. Kautilya and Vishnugupta, the names by which the political treatise Arthaśhāstra identifies its author, are traditionally identified with Chanakya. Some scholars consider Chanakya to be "the pioneer economist of the world". He is known as "The Indian Machiavelli" in the Western world.Chanakya was a professor at Taxila University and is widely believed to be responsible for the first Indian empire.

He is generally called Chanakya but, in his capacity as author of the Arthaśhāstra, is generally referred to as Kautilya. The Arthaśhāstra identifies its author by the name Kautilya, except for one verse which refers to him by the name Vishnugupta.One of the earliest Sanskrit literature to explicitly identify Chanakya with Vishnugupta was Vishnu Sarma's Panchatantra in the 3rd century BC.

Two books are attributed to Chanakya: Arthashastra and Nitishastra which is also know as Chanakya Niti. The Arthashastra discusses monetary and fiscal policies, welfare, international relations, and war strategies in detail. Nitishastra is a treatise on the ideal way of life, and shows Chanakya's in depth study of the Indian way of life.

Cited From
From Wikipedia,Dated:०१-०४-2008
Posted by Desh Raj Sirswal at 4:17 AM

Bhagwan Shree Rajneesh (1931-1990) was born Rajneesh Chandra Mohan in Kuchwara, a town in central India. Various sources state that "Bhagwan" means either "The Blessed One" or "God" and that "Shree" means "Master". At the end of his life, he changed his name to Osho.
His parents' religion was JainismHowever, Osho never subscribed to any religious faith during his lifetime. He received "samadhi" (enlightenment in which his soul became one with the universe) on 1953-MAR-21 at the age of 21. Rajneesh obtained a masters degree in philosophy from the University of Saugar. He taught philosophy at the University of Jabalpur for nine years and concurrently worked as a religious leader.
He taught a form of Monism, that God was in everything and everyone. There is no division between "God" and "not-God".People, even at their worse, are divine. He recognized Jesus Christ as having attained enlightenment, and believed that he survived his crucifixion and moved to India where he died at the age of 112. Osho was noted for reading very offensive jokes; some were anti-Semitic; others were anti-Roman Catholicism; others insulted just about every ethnic and religious group in the world. He explained that the purpose of these jokes was to shock people and to encourage them to examine their identification with and attachment to their ethnic or religious beliefs. His contention was that national, religious, gender and racial divisions are destructive.
Citation:http://www.religioustolerance.org/rajneesh.htm 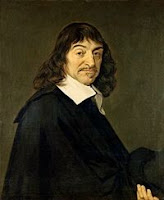 RENÉ DESCARTES (1596-1650)
René Descartes was born on March 31st, 1596 in the town of La Haye in the south of France, the son of Joachim Descartes, a Councilor in Parliament and and intellectual who made certain to provide a good learning environment for his son. In 1606, at the age of 8, René attended the Jesuit college of Henri IV in La Flèche, where he studied literature, grammar, science, and mathematics. In 1614, he left La Flèche to study civil and cannon Law at Poitiers. In 1616, he received his baccalaureate and licentiate degrees in Law. Aside from his Law degrees, Descartes also spent time studying philosophy, theology, and medicine.
After a short stay in the military, Descartes went on to lead a quiet life, continuing his intellectual pursuits, writing philosophical essays, and exploring the world of science and mathematics. In 1637, he published "geometry", in which his combination of algebra and geometry gave birth to analytical geometry, better known as Cartesian geometry.
But the most important contribution Descartes made were his philosophical writings; Descartes, who was convinced that science and mathematics could be used to explain everything in nature, was the first to describe the physical universe in terms of matter and motion, seeing the universe a as giant mathematically designed engine. Descartes wrote three important texts: Discourse on the Method of Rightly Conducting the Reason and Seeking Truth in the Sciences, Meditations on First Philosophy, and Principles of Philosophy.
René Descartes had always been a frail individual, and he would usually spend most of his mornings in bed, where he did most of his thinking, fresh from dreams in which he often had his revelations. In his latter years, Descartes had to relocate to Sweden to tutor Queen Christina in philosophy. Unfortunately, the Queen was an early riser who wanted her lessons at 5:00 o'clock in the morning. This new schedule did not help Descartes fragile health, and he contracted pneumonia, from which he died on February 11, 1650 at the age of 54.
Cited from:http://www.renedescartes.com/
इस हिस्से मे आप दर्शन के हर पहलू से जुड़ी सामग्री चाहे वह किसी भी शेत्र से जुड़ी हो यहाँ पर पाएंगे । बच्चों के लिए भी व एक आम आदमी से लेकर व्यवसायी तक की जरूरत को पूरी करने का साधन इन स्त्रोतों मे उपलब्ध है।
Posted by Desh Raj Sirswal at 7:59 PM No comments: 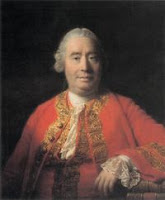 David Hume
The most important philosopher ever to write in English, David Hume (1711-1776) — the last of the great triumvirate of “British empiricists” — was also well-known in his own time as an historian and essayist. A master stylist in any genre, Hume's major philosophical works — A Treatise of Human Nature (1739-1740), the Enquiries concerning Human Understanding (1748) and concerning the Principles of Morals (1751), as well as the posthumously published Dialogues concerning Natural Religion (1779) — remain widely and deeply influential. Although many of Hume's contemporaries denounced his writings as works of scepticism and atheism, his influence is evident in the moral philosophy and economic writings of his close friend Adam Smith. Hume also awakened Immanuel Kant from his “dogmatic slumbers” and “caused the scales to fall” from Jeremy Bentham's eyes. Charles Darwin counted Hume as a central influence, as did “Darwin's bulldog,” Thomas Henry Huxley. The diverse directions in which these writers took what they gleaned from reading Hume reflect not only the richness of their sources but also the wide range of his empiricism. Today, philosophers recognize Hume as a precursor of contemporary cognitive science, as well as one of the most thoroughgoing exponents of philosophical naturalism.
Cited:http://plato.stanford.edu/entries/hume/
इस संग्रह मे आपको दर्शन की हर शाखा से सम्बन्धी जानकारी के लिए शबद्कोश व ज्ञानकोष उपलब्ध हैं, साथ ही बहुत से अन्य लिंक जिनमे जर्नल व पुस्तकालय शामिल हैं, इनमे आपको विभिन्न उपयोगी लेख प्राप्त होंगे।
Posted by Desh Raj Sirswal at 7:57 PM No comments:

Gilbert Ryle
As Waynflete Professor of metaphysical philosophy at Oxford and as editor of the journal Mind for nearly twenty-five years, Ryle had an enormous influence on the development of twentieth-century analytic philosophy. In "Systematically Misleading Expressions" (1932) Ryle proposed a philosophical method of dissolving problems by correctly analyzing the derivation of inappropriate abstract inferences from ordinary uses of language. Applying this method more generally in "Categories" (1938), Ryle showed how the misapplication of an ordinary term can result in a category mistake by which philosophers may be seriously misled.
Dealing with the traditional mind-body problem in The Concept of Mind (1949), Ryle sharply criticized Cartesian dualism, arguing that adequate descriptions of human behavior need never refer to anything but the operations of human bodies. This form of logical behaviorism became a standard view among ordinary-language philosophers for several decades. Ryle's Dilemmas (1954) and Collected Papers (1971) cover a wide range of topics in philosophical logic and the history of philosophy
Citation:http://www.philosophypages.com/ph/ryle.htm
यहाँ पर आपको विभिन्न अख़बार, पत्रिकाए,व सूचना के साधन उपलब्ध होंगे, जो की एक विद्यार्थी की जरूरत होती है। साथ ही आपको Positive thinking से सम्बंधित सामग्री भी प्राप्त होगी।

Best of Luck for Your Bright Future
Posted by Desh Raj Sirswal at 7:55 PM No comments: